For the Good of the Party

I’ll get straight to the point: this article is about the U.S. Presidential Primary process, especially in the context of the 2016 New Hampshire Democratic Primary Election that took place on February 9th, 2016. As much as I’m tempted to delve into the actual politics of the event, what I want to discuss here is the role of the electoral system in this context.

There does seem to be a general, if not common, perception that the mechanics of primary presidential elections necessarily reflect the premises of the democratic system of the U.S.; this is mostly true, but it also has a moderate mix of the premises of privatization. Horray for the privatization of the political process! And what’s more: this is all actually quite new! Superdelegates weren’t introduced into the electoral system until after 1968 (Source)

But they really haven’t been too relevant in the political process until the 1984 election in particular (Source), and then

Check out the Twelfth Amendment of the U.S. Constitution (Source)

The executive Power shall be vested in a President of the United States of America. He shall hold his Office during the Term of four Years, and, together with the Vice President, chosen for the same Term, be elected, as follows
Each State shall appoint, in such Manner as the Legislature thereof may direct, a Number of Electors, equal to the whole Number of Senators and Representatives to which the State may be entitled in the Congress: but no Senator or Representative, or Person holding an Office of Trust or Profit under the United States, shall be appointed an Elector.

The Congress may determine the Time of choosing the Electors, and the Day on which they shall give their Votes; which Day shall be the same throughout the United States.

Parsing the speech is a bit tricky for me, but in terms of relevance to this article, I gathered this:

So those “Presidential Tickets” with the President and VP bundled up together? That’s purely a construct of the political parties. It would be quite inconvenient for a president to have a VP that might be from the opposing party.

Now, I’ve heard MANY different renditions of how “voting is completely useless because the Electoral College is what decides the president and votes have no control over that”, but a closer look at the way electors are decided on a state-by-state basis reveals that electors are almost entirely beholden to the voters they are supposed to be representing.

The purpose for the Electoral College is clear in historical context: in the late 18th Century, information traveled much more slowly. While the postal service did enable more efficient communication than ever before, it still couldn’t be carried across large distances any faster than a horse’s gallop. The electoral college was designed to consolidate voting results and send them over to wherever the president was to cast their vote on behalf of the people they represent. Electors are pledged to vote for a certain candidate, though ‘Unpledged Electors’ were allowed up until the 1964 election, after which NO state has filed a slate for any unpledged electors, though these delegates were allowed to vote for any candidate they chose on election day, much like superdelegates… but I’ll get to that later.

In the past, there HAVE been ‘Faithless Electors’ who pledged to vote for a certain candidate, only to actually cast a vote for a different candidate. The most recent instance of a faithless elector was in Minnesota in 2004 (Source), and have never had a decisive impact on any presidential election. since the late 19th century.

So that’s the electoral college in a nutshell, and also why some states (like Maine and Nebraska for the first time in 2008) split their electoral votes, while others are all-or-nothing as far as how delegates are allocated for each presidential candidate.

But how does this relate to superdelegates?

Well, one important point that is worth bolding in text: the presidential primary system as we know it in the United States has absolutely zero explicit ties to the Constitutional electoral system. They’re similar and closely related, and the former is specifically designed to feed directly into the latter, but the primaries are not a part of the government; they are purely constructed by political parties.

The Democrats and Republicans have both designed their primary systems very deliberately similar to the Constitutional electoral system. After all, the whole point is for their nominee to head right into the actual presidential election, so the best way to prepare them for that race is to emulate it within their own. The primaries not only enable the party to narrow down exactly who they want running, but also allows them to probe for strategies in the national election; public reactions to primary debate questions can give hints on how a candidate might handle that issue in the general election.

So the parties have, instead of electors, delegates, which are invariably elected officials (usually from Congress) that are not only members of, but are very closely tied to, the political party. The individual delegates and even their numbers are decided by the parties on a state-by-state basis. Mind you, pretty much everything about this whole process is simply decided by the party, though they tend to prefer methods that don’t stray too far from Constitutional design and also keep them somewhat grounded in their constituencies. According to the Associated Press, the Democrats have 4,763 delegates and the Republicans have 2,472. These numbers (and their relative proportions of superdelegates) changes between elections. Mind you: the primary election is won by winning a majority of the delegates, regardless of how those delegates are distributed.

These superdelegates are unpledged: they don’t have to explicitly pledge to a candidate up until decision day. In fact, the 2008 Democratic Primary between Hillary Clinton and Barack Obama raised quite a  few concerns about superdelegates; the election started with Hillary having more endorsements from superdelegates, but that shifted later in the primary process, presumably to match popular opinion. Indeed, the race was close enough that the superdelegates could have swung it. Ultimately, enough of them voted for Obama to win him the nomination. (Source)(Source)

Why the superdelegates? Well, remember, the political parties do their best to resemble the Constitutional system, but they are not a governmental entity. While the courts can act on the legality of their actions in the context of the constitution, political parties are not bound to do exactly what the people say… and doing so has bitten them in the past. The Superdelegates were introduced into the Democratic Primary system after 1968, when (Vice President at the time) Hubert Humphrey was nominated by the Democratic Party… and not by the primary votes. While the primary system was based on the Constitutional election system, it was, in practice, largely ceremonial. The Democratic National Convention, when convening to decide who to officially nominate for the Presidential race, were not bound to select whomever won the primaries… in fact, they didn’t even need to select a nominee from those who ran in the primaries. In 1968, Hubert Humphrey was selected as the Democratic nominee despite not having run in a single primary. The party’s leadership completely disregarded the will of the voters that was expressed in the primaries and selected one their influential leaders. The Democratic voters did not vote for Humphrey in the primaries and frankly felt betrayed by their own party leadership. Consequently, Humphrey was smashed by Nixon in the election, 301 to 191 electoral votes. (Source)

After that, the Democratic Party members decided they needed a way to prevent something like that from happening. The party’s nominees would necessarily need to reflect the desires of their constituency… though not entirely. The party leadership was not about to cede ALL power of nomination to the voters. Enter the Superdelegate.

So how are they relevant now? Well, the New Hampshire Democratic Primary on February 9th of 2015 between Bernie Sanders and Hillary Clinton (and also technically Martin O’Malley) yielded very interesting results from news sources.

Across the board, Bernie Sanders won the popular vote by a margin of over 20%.
Yet… many news agencies also reported a 15-15 split in delegates between Sanders and Clinton. Why? You guessed it: Superdelegates. They flocked to support Hillary.

This prompted quite a bit of backlash against the Democratic primary system, and in  my mind, understandably so.

Here are some graphics on the state of two candidates shortly after the N.H. primary:

Disclaimer: While I also believe that CNN has a clear bias towards the establishment manifested in very selective reporting, I have yet to see them flat-out lie. They may neglect to show numbers that don’t support their preferred narrative, but I don’t think they’d outright lie about them. 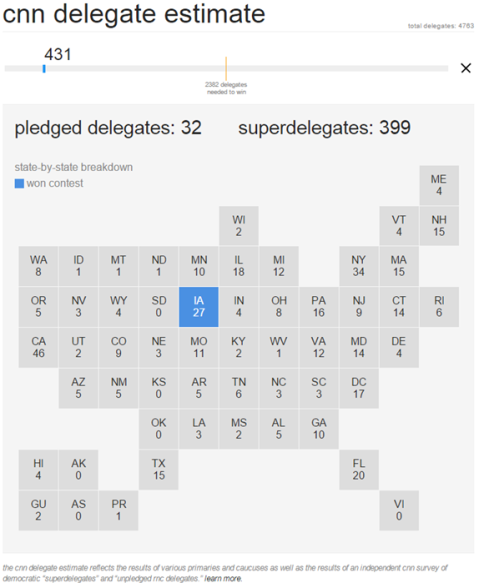 Remember: pledged delegates are committed to the candidate their constituencies vote for immediately once the results are settled. Superdelegates can change their vote all the way up until decision day, so those numbers ARE subject to change, but regardless, the disparity is glaring.

Again, this article isn’t about supporting one candidate over another, but to draw attention to the sharp disparity between democratic ideals and reality. It can be easy to conflate the primary elections with the actual Constitutional electoral process. The parties are in it for themselves, and cater to their constituents at least as much as they need to in order to retain their votes. While they have yet to take any drastic strategic measures with Superdelegates, their effect on the election is palpable.